Facebook has introduced a new feature called ‘Action Links’, a Timeline tool for third party applications. This feature offers a new way for Facebook users to interact with Timeline apps.

The customizable links appear below an app’s post on the user’s Timeline or news feed along with the links for Like and Comment. These links allow users’ friends or subscribers to do something within their app when the users’ Graph Stories appear on their friends’ Timeline and news feed.

“When someone checks in on foursquare and shares it on their timeline, friends can already like or comment on the resulting post through the links that appear as part of the story. Now with action links, foursquare added another link – “Save this Place” – that enables people to save a place to their foursquare to-do list directory from Facebook.” 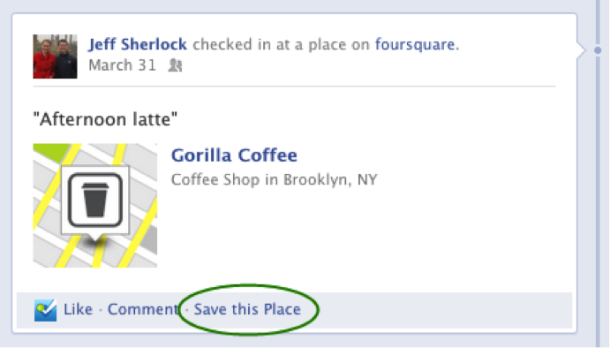 Alex Wyler at Facebook wrote in a blog, “Action links tie one action to another, and can be part of any Open Graph story. Developers can designate an action link for any action they define, which will appear throughout Facebook.”

The customized actions are created by the developers and Facebook says that the action links could drive more distribution to the developer’s apps with fewer user clicks. It is also a great way to prompt users to sign up for a product if they haven’t already.

These action links have started appearing on the desktop version of Facebook and it is not yet available on the mobile version.

The Facebook documentation page provides more information for developers who are interested in creating their own action links.