iPhone Users More Likely to Use Wi-Fi Than Android Users

iPhone Users More Likely to Use Wi-Fi Than Android Users

According to new statistics released by the metrics firm comScore, iPhone users are significantly more likely to use Wi-Fi than Android users in the United States and the United Kingdom. 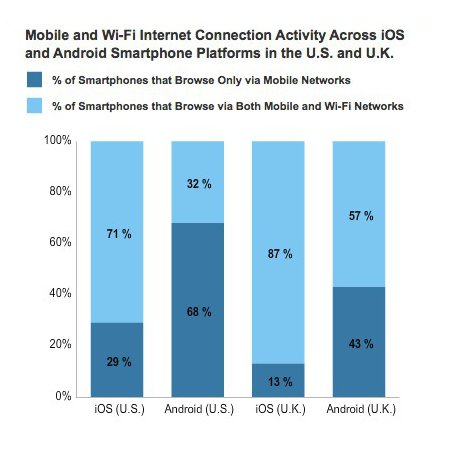 On the other hand, 87% of UK iPhone users use Wi-Fi and cellular networks while only 57% of UK Android users access both the networks. comScore says a mix of businesses and high speed wireless infrastructure have led to those differences in the United Kingdom.
The report took into account the share of unique smartphones connecting to operator and Wi-Fi networks, to reveal the Internet connection patterns across markets.

Serge Matta, comScore President of Operator and Mobile Solutions said, “As bandwidth usage increases and the spectrum becomes more scarce, operators, OEMs and others in the mobile ecosystem should understand the different dynamics between the use of mobile and Wi-Fi networks to develop strategies to optimize resources and provide their customers with continued high-quality network service.”