Study Reveals that Twitter is the Fastest Growing Social Network

Study Reveals that Twitter is the Fastest Growing Social Network

A new study reveals that Twitter is the fastest growing social network. Twitter users increased by 40% from the second quarter of 2012 to the end of the year. 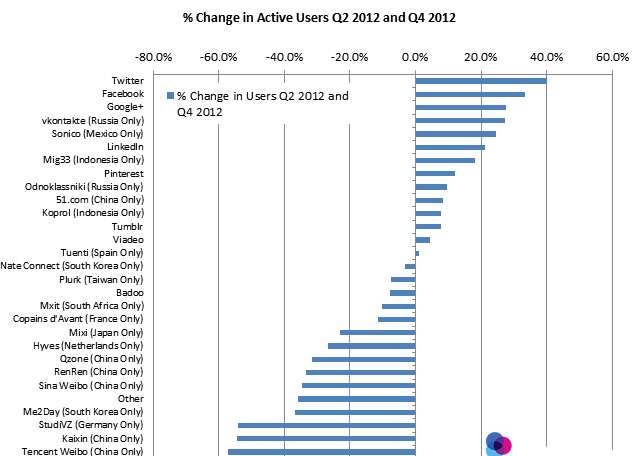 Twitter has attained an impressive 714% growth rate among active users since July 2009. According to a report on the global web index, almost 36% of the world’s Internet population, nearly 485 million people use Twitter. Twitter usage is changing in two respects. Firstly, it is becoming a source for identifying users. Secondly, people use Twitter as a tool rather than a social service.

“Amazingly, only 51% of active users claim to have posted a tweet in the past month. This means that half the active user base is just reading, reacting or using Twitter as a source of discovery. The caricature of the average Twitter user banally talking about what they had for breakfast is dying,” read the report. The report reveals a chart that describes the percentage change in active behaviors of Twitter users through PC and mobile.

According to analysts, the three key reasons behind this growth surge are the increased usage of mobile Internet users, Twitter’s popularity among the people in their 50s and mass media integration that provides an increased level of exposure.