XBOX Kinect: Gesture-gaming at its best

XBOX Kinect: Gesture-gaming at its best

See. Feel. Jump. That’s Kinect! I experienced the demo of this wonderful device at the Mall of America, Minneapolis. Wonder what’s that? Let me explain. XBOX Kinect is an extraordinary gaming device developed by Microsoft Corporation. Kinect is a gaming addon for the XBOX 360 to play controller free game just by using gesture motions. The experimental Kinect was previously known as Project Natal designed for average gamers to give an awesome gaming experience by controlling the game with natural movements.

Kinect was actually a long term project from Microsoft to compete with its XBOX technology and competitors Wii and Sony. Since Wii and Sony are giving a tough competition on the gaming device industry, Microsoft decided to unleash the gesture controlled device Kinect to the world! 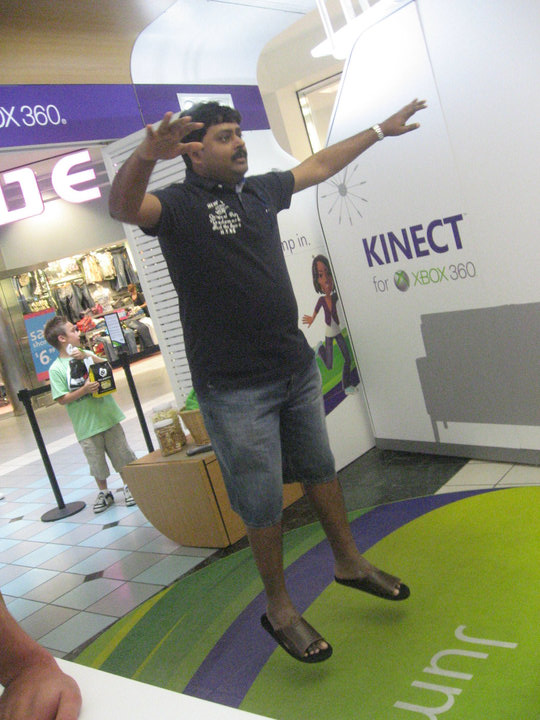 How does Kinect work? The technology behind Kinect isn’t that complicated, so let me explain how Kinect works. If you have used Nintendo Wii, you should have an idea of its workings. Kinect works in much the same way.

Everything works to be the same except carrying around the controller. Kinect captures your actions using the sensors, interprets and sends the signals to the XBOX 360 and finally you can see that movement on the screen.

So with Kinect, we don’t need to worry about holding the controller to perform actions. As per their tag line – you are the controller, Kinect makes use of our movements to control the game. Well, I shouldn’t say this, but after checking out this uber cool device, even as a Wii Fan, I’ve fallen in love with this amazing device that brings next generation gaming experience today.

Microsoft Kinect is not yet officially launched and according to Microsoft’s sources it is expected to be launched by December 2010. Hope to see this next generation device coming for this holiday!